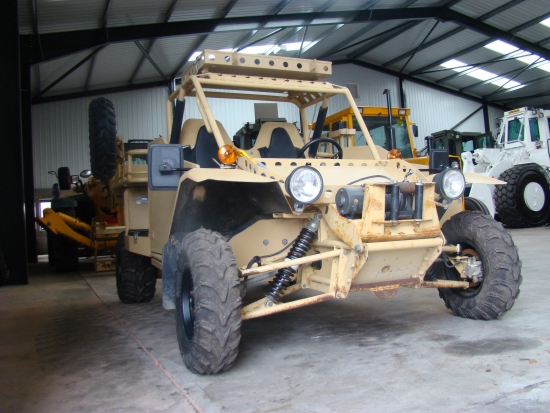 The price: P.O.A. The Springer is an all-terrain vehicle developed for the UK Army by UK-based Enhanced Protection Systems (EPS). The vehicle supports British troops in Afghanistan. The new vehicle fleet was delivered to the army in summer 2009.

The vehicles can be deployed in landing zones to support airborne and light infantry units and used to move combat supplies from helicopter landing sites to forward operating bases (FOB).

The Springer is a two-wheel drive vehicle capable of being driven off-road. Springers were originally intended to be permanently placed at FOB, but the vehicles are capable of delivering supplies to frontline troops.

The vehicles have a maximum speed of 40mph. The 1.4l engine provides less power, but the vehicles have low centres of gravity and the ability to negotiate tight corners and uneven and muddy terrain.

Tests have proven the capabilities of the vehicle. The Springer is more versatile than the quad and trailer combinations sometimes used to shift loads from helicopter landing sites by the UK Army. It also offers more protection to operators. The vehicle is lightweight and helicopter transportable.

The Springer is based on a current production Tomcar TM5. The base frame is considerably revised and while the original chassis is not strengthened, the overall protective rollcage is.The rear loadbed, which tilts rearwards for automotives access, is modified and can carry up to one tonne including a standard NATO pallet, this loaded by the front-mounted 8,000 lb-rated electric winch and using the two side-mounted sand ladders as a ramp

The 4 x 2 vehicle can self load a 1t pallet of supplies. Each vehicle is equipped with an 8,000lb self recovery winch and sand ladders, which act as loading ramps for cargo pellet.

The Springer is fitted with weapons holders to carry light support weapons (LSW). SA80 A2 standard assault rifles are available for two crew members. The SA80 can be fitted with a SUSAT sight and a common weapon sight (CWS). Other weapons include a C7 rifle or a Minimi, a fully automatic light machine gun. The vehicle can also be fitted with a general purpose machine gun (GPMG) mount.

The Springer is fitted with a 1,400cc naturally aspirated Lombardini diesel engine with the option of turbocharger and petrol variants. The continuously variable transmission (CVT) in combination with a drive chain efficiently utilises engine power.

Late 2008 and as the security situation in Afghanistan continued to deteriorate, the UK MoD recognised that it had an emerging requirement for a load carrying vehicle at the lower end of the weight and protection scale. This requirement called for a small and agile vehicle that could rapidly transport stores between helicopter landing/drop zones and Forward Operating Bases (FOBs), and included a payload requirement of around one tonne, that payload possibly palletised, and thereby ruling out anything of conventional ATV configuration.Following competitive trails, in April 2009 the MoD awarded UK-based Enhanced Protection Systems (EPS) a GBP3 million contract for 78 Springer vehicles. The first of these were delivered within four months of contract award, with final deliveries made some six months later.Springer is based on the Israeli-designed, US-built Tomcar all-terrain vehicle which has been available for around 30 years. Reportedly designed as a helicopter transportable light vehicle for the Israeli military, both civil and military versions of the continually evolving design are now widely available. The Tomcar also forms the basis of the G-NIUS Gardium, the first fully autonomous Unmanned Ground Vehicle (UGV) vehicle to be used operationally.As a result of user feedback from British troops in Afghanistan EPS announced the uprated Springer 2 mid-2010, with some proposed Springer 2 revisions (including the wheels/tyres) capable of retro-fit to original production vehicles. Outline details and provisional Specifications of Springer 2 can be found elsewhere in this entry.With the territorial realignment within Helmand Province, Afghanistan and the withdrawal of UK

The Springer is based on a current production Tomcar TM5. The base frame is considerably revised and while the original chassis is not strengthened, the overall protective rollcage is.The rear loadbed, which tilts rearwards for automotives access, is modified and can carry up to one tonne including a standard NATO pallet, this loaded by the front-mounted 8,000 lb-rated electric winch and using the two side-mounted sand ladders as a ramp. The load tray on the front of the vehicle, which tilts forward for maintenance purposes, carries an additional 100 kg of stores, while the rack above the two crew members is used to mount an Electronic Counter Measures (ECM) package.Blast protection was not considered a pressing need for this procurement (insurgents would have limited opportunities to lay mines or similar devices in anticipated areas of operations), or indeed practical for a vehicle that has an unladen weight of less than 1,000 kg. A degree of ballistic protection from the threat of rifle or sniper fire was, and composite material `doors` that provide a classified level of ballistic protection are fitted.The Lombardini naturally aspirated diesel engine is modified to run on military grade fuel, and in the process is adjusted to deliver a small increase in torque and around 3 hp more. The automatic V-belt CVT two-speed (high/low) transmission and oil-bathed chain-type final drives remain standard.Other modifications carried out here in the UK by EPS include a complete re-wire. The four-wheel hydraulic disc brakes are revised, as are the front 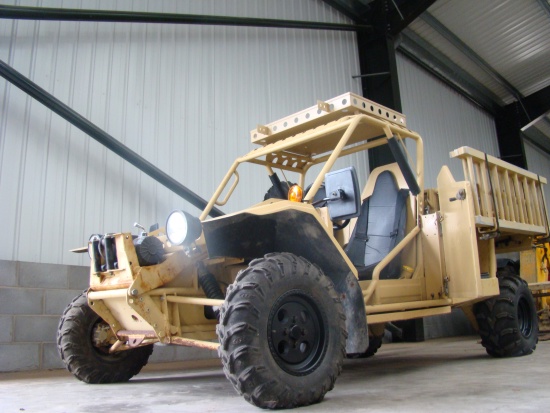 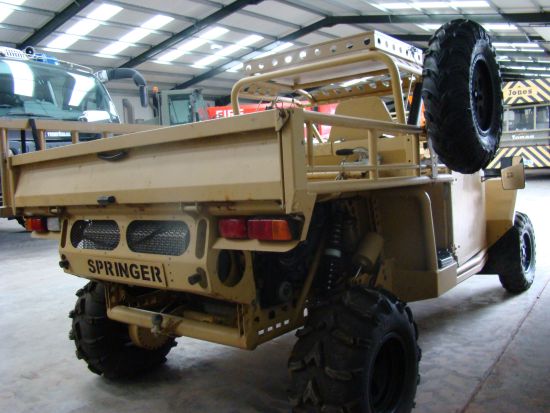 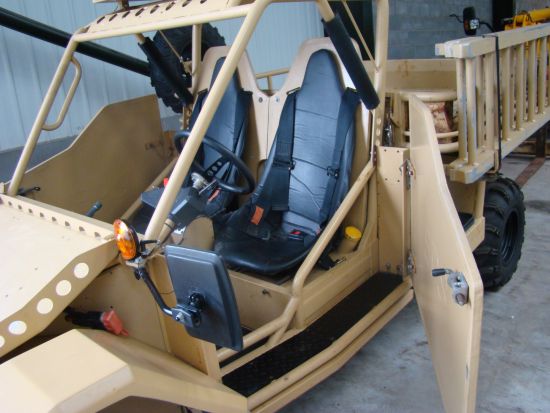 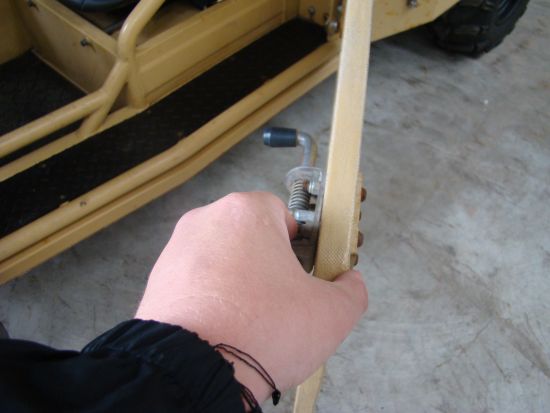 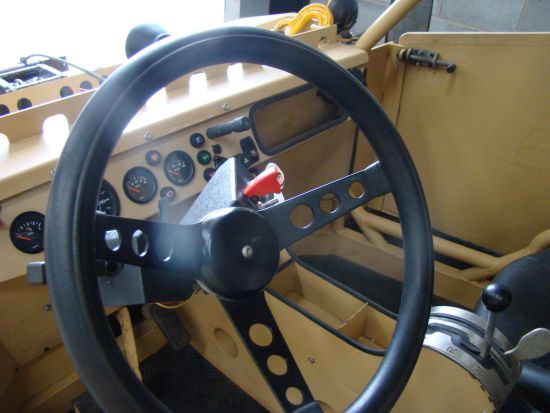 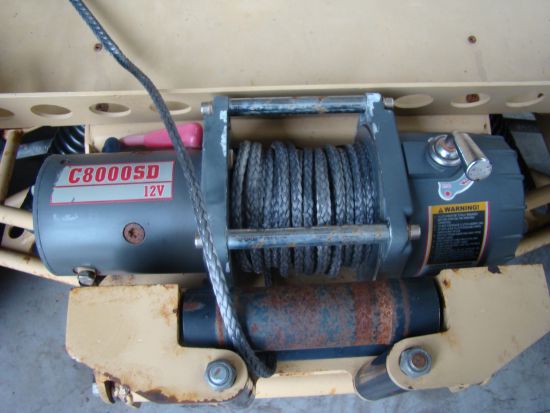 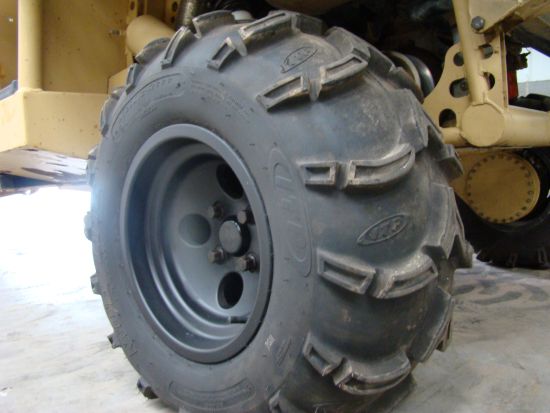 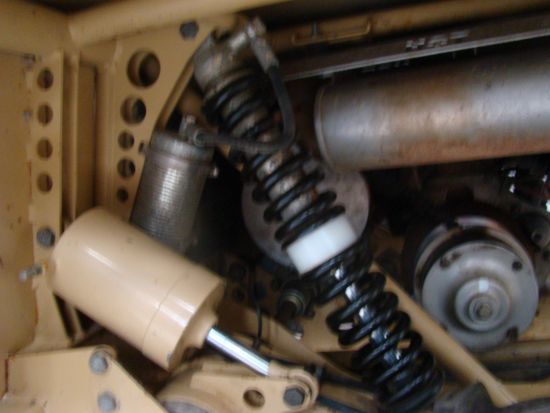